Philanthropy and service play a major role in the life of a ZTA. It is one of the most important... and fun aspects of sorority life. Since adoption as the Fraternity's national philanthropy in 1992, the focus of Breast Cancer research, education, screening and treatment has brought enthusiastic support from Alumnae and collegians, whose mothers, grandmothers, sisters and friends have been touched by the disease. Thriller 5K- For the past four years, Kappa Upsilon has partnered with the Milledgeville Chamber of Commerce. We host a 5K at the local abandoned insane asylum in the evening of the third weekend in October.. The goal of the race is to complete it with your ¨flags¨ still attached to you. ¨Zombies¨ try to grab your flags. ZLAM the Door on Breast Cancer- It efforts to raise awareness for our cause, Zeta Tau Alpha partnered with one of the fraternities on campus, Pi Kappa Alpha. Donations were taken and students/ faculty were encouraged to put their hand print on the door. These doors were put on display for the rest of October. Kappa Upsilon won the Membership Selection Award which is based on outstanding recruitment results and successful membership selection procedures. We also were awarded Crown Chapter as well as an Academic Achievement Award and $50,000 Founders club level for the foundation.

The Silver Award was also awarded to Kappa Upsilon this year.  A chapter may only receive a Silver Award if they are on point in every facet of chapter operations and programming. This award is not handed out lightly as we had to be top notch in every category to even be considered for silver.

“Convention was a whirlwind of a week. It’s pretty much a huge celebration of all the chapters across the United States. It was such an honor to represent Kappa Upsilon as President and have the opportunity to accept all the awards we received. I could not have been more proud to represent our chapter”, President Mackenzie Newsome said. We would not be where we are without each and every sister in this chapter.

Lesley Manzer said, “I’m so thankful I got to go to the convention and represent our amazing chapter. It was eye opening in that I realized everything we do together in Zeta is for a greater purpose of not just for our chapter or the sorority, but becoming a woman who uphold high values and play an important role in influencing the community. It was a really great experience, and it really inspired me to pursue a leadership role in ZTA.”

“Convention was an amazing experience I will never forget! It was so special to celebrate the accomplishments of Zetas from all across the country and see how important Zeta is even after you graduate! Convention reignited my passion for this organization and I could not be more grateful for the opportunity to represent Kappa Upsilon”, says Mary Spears. 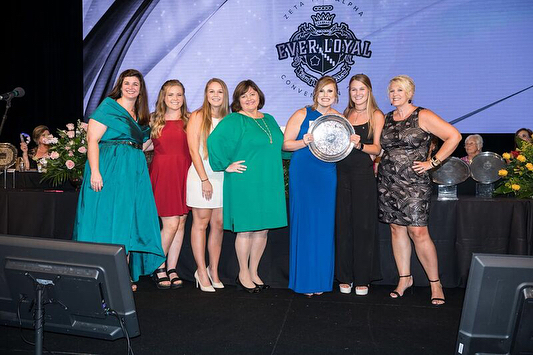